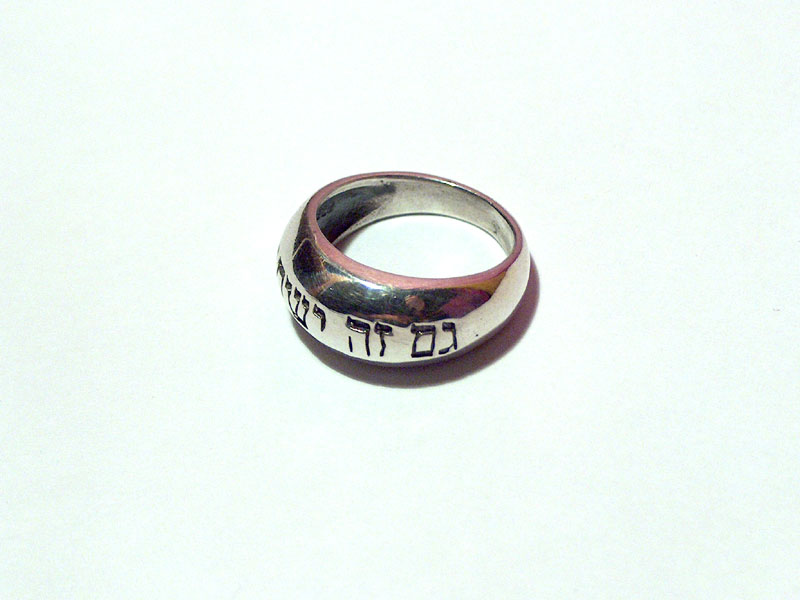 This will also change!

The happiness ring is related to a story taken from Buddhism. The story is told like this:

"Once there were two brothers who lived in their father's house. The father was very rich. When he died he inherited everything to his two sons. The two brothers split everything into two. Later, the younger brother found in one of the rooms a bag with two rings. One was with a big diamond and the other was a simple silver ring. The older brother claimed the diamond ring and the young brother agreed. When the young brother arrived home he looked at the ring and found engraved - "This will also change".

"It was spring time and they were all happy. The summer was also very beautiful for the two brothers. In the fall, the two brothers felt a little sad. The younger brother looked at the ring and was reminded that the sadness will pass. In the winter, the older brother was desperate while the young brother remembered that this mood will also change. The life of the younger brother continued happily while the older brother was living a life of sorrow."

The reality is constantly changing. When a man believes and holds on to this belief without being aware that it will also be gone, he is connecting himself to suffering.

The ring is engraved in Hebrew with the sentence "This will also change".

The ring's meaning is to remind the wearer of the true nature of life - change.

It is better to conquer yourself than to win a thousand battles. Then the victory is yours. It cannot be taken from you, not by angels or by demons, heaven or hell.