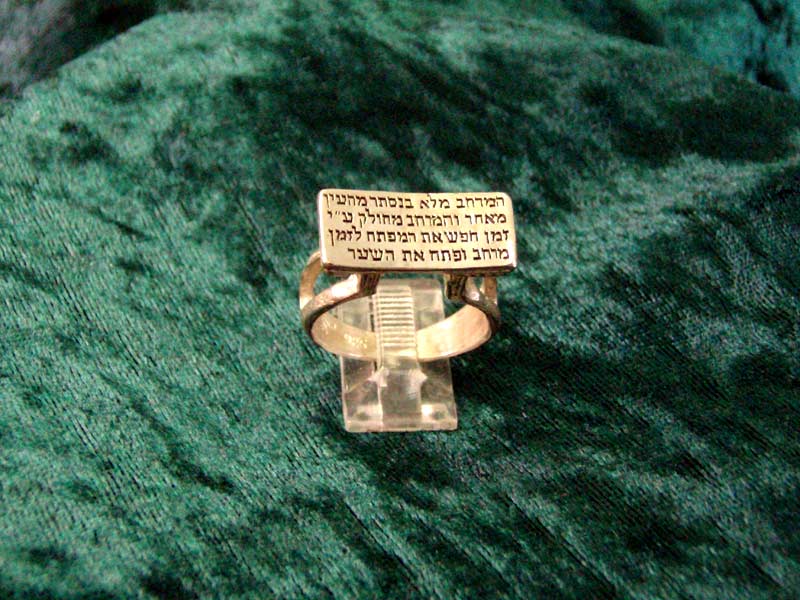 The ring is made in the shape of the Torii gate that appears at the entrances of Shinto shrines and other holy places in Japan. The gate symbolizes the entrance to the holy space where there are good spirits and forces of nature.

The origin of the Torii is said to come from an old Japanese legend, when the sun goddess became extremely annoyed with her prankster brother. She hid herself in a cave and sealed the entrance with a rock, causing an eclipse. The people were afraid that if the sun never returned, they would all die. So, per the advice of a token wise old man, they built a large bird perch out of wood and placed all the town's roosters on this perch. They all started to crow noisily, causing the curious sun goddess to peek out of her cave. Having opened a crack in the door, a large sumo wrestler from the town ran up and pushed the rock away, letting the sun out and thus - the world was saved. That bird perch was the first Torii gate. From then on, the Torii became a symbol of prosperity and good fortune, and spread all over Japan.

The ring is engraved with a sentence in Hebrew:

"The space is full of mystery, because the space is divided by time. Search within yourself for the key to time-space and open the gate”. The Ring symbolizes the entrance to higher and hidden spaces to which the key is the person himself.

The ring is dedicated to the known Japanese animation artist - Hayao Miyazaki.

The ring is made to give the wearer the understanding that the key for creation and sanctity is within him.

In reality there are no others, and by helping yourself you help everybody else.